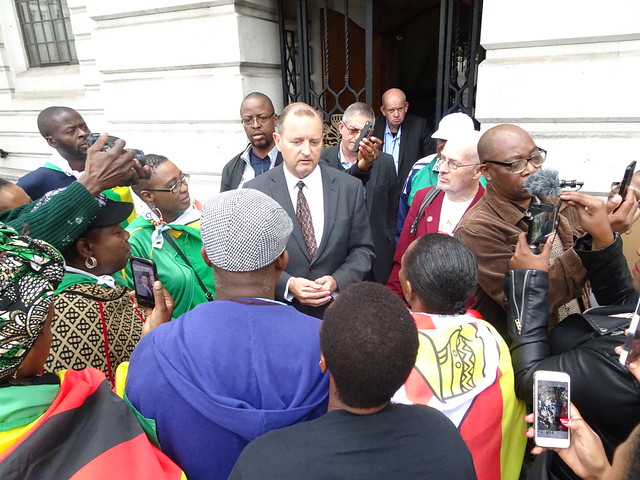 As Africans in the U.K. on the 11th September 2019, (11/09/19) we united to protest at SOUTH AFRICA HOUSE against the Xenophobic attacks on black migrants by indigenous South Africans carried out mostly in the capital city Johannesburg and the port city of Durban.

In the past weeks, we have seen yet again, Xenophobic atrocities happening in SOUTH AFRICA against fellow black Africans. Zimbabweans, Nigerians, Ghanaian's and so many other Africans have been affected. One of the videos shows a man being burned alive, in another video a man is apparently beaten to death, he is effectively being summarily tortured by mob rule.

With the xenophobia attacks following inflammatory statements, by members of the South African Government, where they seemed to encourage the xenophobia, on South Africa broadcasting corporation (S.A.B.C.) which is Government owned and controlled, what crimes have those affected committed? None, no crimes, they have been targeted, just because they are not South Africans. If we were to ask those committing these barbaric acts, why they are attacking foreigners, they have stupid hurtful answers. When interviewed by S.A.B.C., some said, “They have our jobs, our women, Nigerians all sell drugs.” Does that mean black migrants should be treated in such a horrific way, and is it correct to label all Nigerians as thieves and drug dealers considering that it is a Nigerian who owns Gatwick Airport, apparently most doctors in south Africa are Nigerian and Nigeria is one of the largest Net exporters of oil in Africa.

Early on in the protest, ZHRO Chairwoman, natural born leader and firebrand activist, Chipochedenga Parirenyatwa, had the loud hailer in her hand. She demanded that they (The South African High Commission Representatives) come out and speak to the protesters, by shouting towards the locked door, but through the metal bars. It was surprising, when they did indeed come out. (credit to the South African High Commission staff and their leaders for coming out.)

“What was being done to help families who have lost loved ones, homes, jobs and would there be compensation for the terror they went through?"

He did not really have a concrete answer and actually accused people on social media of posting fake news. He refused to answer questions about the words spoken by RHAMAPHOSA the SOUTH AFRICAN PRESIDENT and why this xenophobia was happening again.

Chipo Parirenyatwa asked some difficult questions which can be found on the ZHRO Facebook page. The High Commission staff, were not comfortable with the questions so, they retreated back into South Africa House.

They heard our message that we are not happy and we need something done as this is not the first time XENOPHOBIA has happened. We will not get tired of fighting for the voiceless and the powerless and those that feel they do not have a choice.

There was a petition signed by over 100 people on the day, saying no to XENOPHOBIA and NO to AFROPHOBIA. AS Africans (Africa is a Continent, not a nation), we need unity and we need oneness not to give each other sanctions but to be our brother and sister’s keeper.

WE SAY ONE LOVE ONE NATION ONE UNITY #NOXENOPHOBIA#NO AFROPHOBIA.

A special thank you goes to those who brought the drums, loud-hailer and other instruments, Sarah and Rashiwe Bayisai. Sarah and Rashiwe Bayisayi are also thanked for leading most of the singing along with Mary Muteyerwa who was wonderful on the drums. Thank you also to Philip Mahlahla who was taking the photos. A big thank you to Salani Mutseyami, Vuka Zimbabwe, John Burke and AiLTV Online who published the planned protest on various media streams including social media. Thank you to Tinashe Muskwe for making some banners that were used in the protest. Thank you to Orivasi Madondo who was in charge of gathering petition signatures for most of the day. Also to Facebook star, Albie Matarutse who flew in from Germany just for this protest, appropriately enough wearing a Nelson Mandela T Shirt. 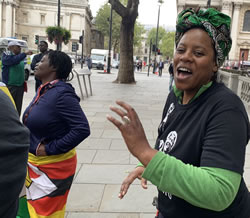 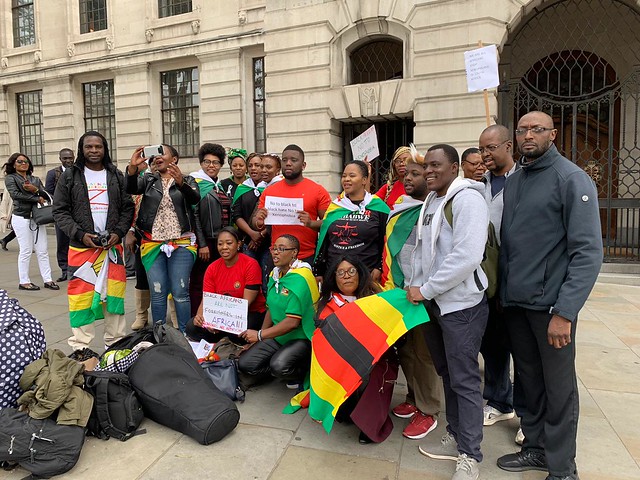